Connor Sephton answered
Sharks are quite fascinating to look at, as their bodies have a sleek tubular shape, sort of like a submarine crossed with a sleek silver missile. Sharks are strong, agile, and very coldblooded - since they are predators, they have wide set eyes that carry a chillingly cold and emotionless expression. If you consider the warm, friendly eyes of a cute little puppy, and contrast them with the icy gaze of a shark, you will notice an incredible difference in the affect, or emotion, of each type of creature.

• Sharks, when they open their huge jaws, have many rows of razor sharp teeth, which help them to chew up their prey and swallow it. Sharks have incredibly strong jaws - if you are familiar with the movie, Jaws, from the 70's, you'll know the terror that these large fish can provoke in swimmers and sailors. However, the shark is Jaws was actually animatronic - it was remote controlled and completely harmless.

• Unfortunately, real life sharks are not harmless to human beings - often, in areas such as Australia or California, people fear going into the water, because sharks have been known to maul or even kill swimmers and surfers. Since a shark is pale grey and shiny, it can blend into waterways quite easily. However, a shark has a triangular dorsal fin attached to its back; when this dorsal fin shows above the water, it is a dead giveaway that danger lurks.

Sharks are very beautiful, because they move with innate grace, and their bodies are very streamlined. However, the appreciation for sharks is usually tempered with some degree of fear or even revulsion, as these creatures, when they feed on their prey, are quite frightening to behold.

To see sharks up close, without putting yourself in any danger, consider a trip to a local aquarium, or perhaps a little TV time with a nature documentary centered on sharks.

Anonymous answered
They look like big large in length fish. They have large teeth, and can kill.

Brandon Thompson answered
Well, here is a picture and I hope it will help you

smiley =) answered
It depends on what type of shark is it.

Anonymous answered
They are torpedo shaped similar to a dolphin but have several rows of teeth.

Mark Mottian answered
There are plenty of images on google for you to see.

Your Worst Nightmare Ever answered
Here is a photo of it: 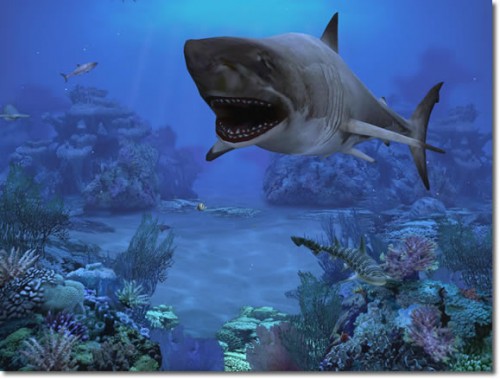 Anonymous answered
They have sharp teeth and long heads. Watch out because they smell blood from a distance.there sharp noses sense things hundred of miles away.

Anonymous answered
They have big teeth and live in the sea

Anonymous answered
It has really  sharp teeth and it looks scary, that's for sure.... Maybe you should look at the picture V-mar218 put up..... =D =D

Anonymous answered
They are freaky

Anonymous answered
They are ugly