What Are The Most Dangerous Pets In The World?

Anonymous answered
Any animal that has an insane and cruel owner. That animal (like it's owner) could lash out, unprovoked. Depending on the animal, type of wound and the size of the victim--it could result in minor injury, or death. Dangerous people can create a viscous bunny rabbit, or gerbil. I've met them. What's really scary is they are mild mannered and timid when in public, or around people they don't know. They are mostly single men with lasting female relationship issues--rage and fear fueled.

Susan Hayes answered
For some people keeping an ordinary pet is unthinkable. They would no more settle for a kitten as a pet than some people would chose to drive a mini-van. It’s all about finding a companion that is as unique as they are, and in this quest many chose exotic critters that are as dangerous as they are rare. 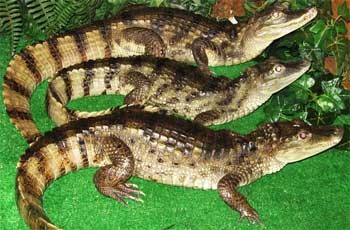 Awww how cute! Sort of.  I suppose.  People like these?Alligators and Caimans start off life as adorable little guys who look just darling as they hiss try to gnaw on your thumb. They fit in the palm of your hand and are just ugly enough to be cute, thus avoiding the fate of becoming matching luggage or a Hollywood starlet’s new purse.

The trouble is, they don’t stay tiny and darling.  No matter what that seedy pet salesman tells you, confining an alligator or caiman will not stop it from growing, and no amount of handling and tummy rubs will ever convert your wild carnivore into a snugly, cuddly fellow that can sleep at the foot of your bed. Caimans grow to 6-7 feet, while male alligators can be expected to hit the 12-13 foot mark. No matter what you do, big Al just isn’t going to fit in your bathtub by the time he’s a teenager. 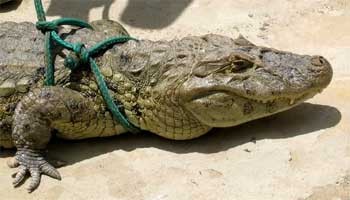 Not shown: 2 minutes later when the knot comes undone and chaos ensues.With a lifespan of up to 70 years, expensive dietary requirements and a tendency to bite the hand that feeds it, these toothy reptiles are not for the faint of heart. Attacks by pet caimans and alligators are not often reported, because many of the pets are illegally owned, and frankly it’s embarrassing to admit that your kick-ass pet tried to eat you, your family members or your neighbour’s dog Fluffy. Still, there are enough maulings each year to make sure that these predators made the list of pets you do not want to own without investing in life insurance. 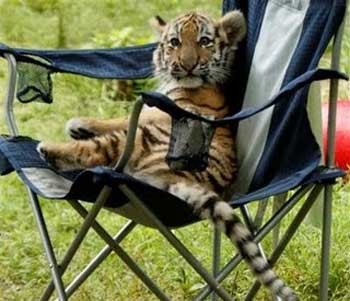 See how cute and cuddly? He won't try to eat his owner for at least another year.Tabby cats are one thing, but there are folks who prefer the company of lions, tigers and other exotic members of the cat family. Since the well publicized 2003 attack by Montecore, one of Siegfried and Roy’s beloved white tigers, the dangers of owning these beautiful and deadly hunters has become well known. There are currently as many captive tigers living in zoos, menageries and backyards as there are living wild on the entire planet, and nearly all of them are dangerous. In the United States alone there have been over 200 mauling incidents involving captive big cats since 1990, 21 of them fatal. 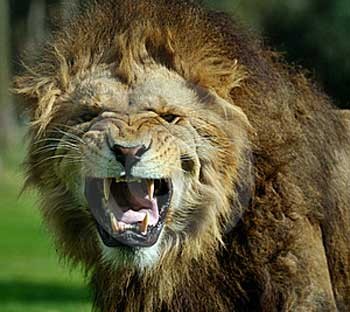 Not so cute when the grow up.Like alligators, big cats are hunters and carnivores and their need to hunt is as powerful as a teen-aged boy’s need to eat every 20 minutes. They are powerful, well armed by Mother Nature and they have as much in common with today’s domestic house cat as a Pomeranian has with a Dingo.  Most of these cats weigh in at at least 100 lbs, but the largest species, the Siberian Tiger can be as large as 600 lbs. You can’t just toss one of these guys a ball of string and call it a day; they need a large enclosure, proper diet and a lot of things to keep them busy so you can keep yourself off the menu. Even the most experienced handlers can suddenly have a cat turn on them, and when a carnivore gets cranky, people tend to bleed.

Snakeskin furniture. Caution, may eat user.No list of dangerous pets would be complete without including serpents, both the venomous and constrictor species. In this case the word “pet” is a bit of a misnomer, because last time I checked, pets were supposed to be attached to their owners and provided some level of companionship. Scientists state that snakes are non-social and do not form affectionate bonds, making them more like your college roommate than your childhood pet.

Between 1990 and 2008 in the United States, 16 people were killed by captive venomous snakes. The vast majority of snake bites are non-fatal when treated, so the true number of people put in hospital after a love bite from their fork tongued friends is far higher.  8 people have been killed by constrictor type snakes in the same time frame, making constrictors statically less likely to snuff out their owner’s life than their venomous kin. There are no numbers on how many boas and pythons snacked on neighbourhood pets instead of their two legged keepers, or how many folks died of heart failure after finding an escaped constrictor in their supposedly snake free home.

Exotic snakes are not just dangerous to their owners either; they can do a great deal of damage to the local ecosystem if released into the wild by an irresponsible handler who tires of them.  In Florida, young Burmese pythons are a hot commodity, but once they reach a fraction of their potential size of 20 feet, many owners are abandoning them into the Everglade swamplands. They are eating other endangered species, threatening to destabilize the entire ecosystem, and even consume the resident alligators, sometimes with disastrous results. 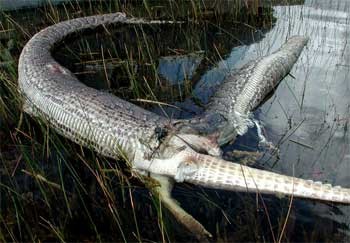 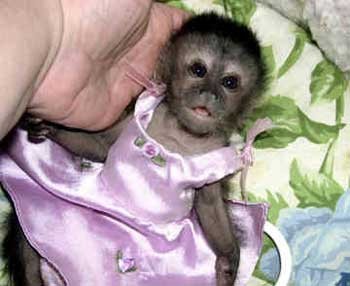 When he gets bigger he's going to need primate therapy over this picture.More than a dozen attacks involving pet primates have occurred since 1990, meaning these little guys have been up to more much more than just monkey business. The most common report seems to be monkeys or apes biting their owners or escaping and going on a banana fuelled rampage, destroying property and in one case actually attacking a police officer.

Often bought as a surrogate child by the desperate or lonely, or by those who somehow think that there is nothing creepy about dressing a primate up in a tutu parading around the neighbourhood.

He was forced to wear a dress once too often.Monkeys and apes commonly become increasingly aggressive as they mature. Most monkeys have a life span of 30 years, and apes can live 50 in captivity, meaning they are a life long commitment for an owner, especially once they reach maturity and pass the “cute and cuddly” stage. 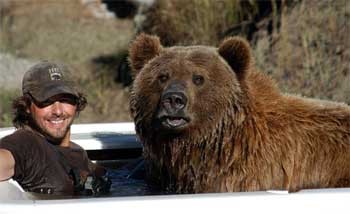 Bear, beer,  hot tub. No way this could go horribly wrong...In defiance of most people’s basic survival instincts and despite such charming adages as “hungry as a bear” and “mean as a bear”,some people keep these notoriously dangerous omnivores as pets.  Most commonly kept are Black bears, which are smaller and more docile than Grizzlies, though still quite capable of taking down a full grown adult human if they feel the urge.

Since 1990 there have been 3 reported fatalities caused by American held pet bears, and many times that number in non-fatal maulings. These attacks are usually brought on by the owner or a family friend trying to get snugly with this living, breathing teddy bear, forgetting that human’s are not friends but food and real bears don’t specialize in picnic basket related shenanigans. 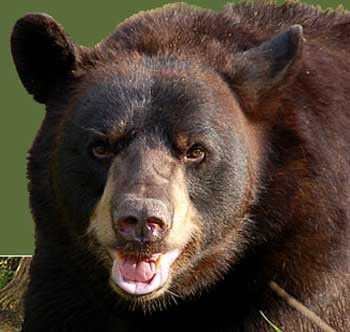 Adult male black bears can weigh over 600 lbs, while adult grizzly bears can tip the scales at a nightmarish 1000 lbs depending on their geographical location.  All that fuzzy ferocity was not meant to be penned up and most exotic animal trainers consider bears to be the most unpredictable and dangerous of the animals they train.

Stewart Pinkerton answered
Alligators - just say no! I do know of someone who has some box jellyfish, but that's more of an insanity, and probably illegal.

DENNA NOLAND answered
Snakes and dogs cause at any time they can turn on you.