Why Do Gold Fish Gulp For Air At The Surface Of The Tank? 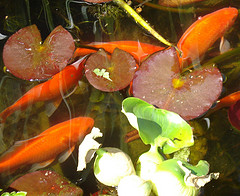 bucklava
There may be a variety of reasons why goldfish go up to the water's surface to gulp air.

One simple reason is that they are looking for food. This doesn't necessarily mean they are actually hungry. Apparently, goldfish will eat until they explode, so to speak, they simply do not know when to stop.

Occasionally, they mistake tiny air bubbles for food, and hey presto, they look like they are gasping for air. Unfortunately, this can lead to other problems by allowing air to enter the digestive tract.

To avoid this, it may help to soak the fish food a little before feeding it to the goldfish. The flakes will then sink quicker and get the fish used to eating lower down in the water.

Gasping for air might actually be another reason. If the water does not contain enough oxygen to sustain them, they will grab what they can from the top of the water to survive.

It is best to check out the water quality; high levels of nitrate in particular can affect goldfish. Regular changes of water and extra provision of oxygen, perhaps via a small pump, may help.

Another reason for gulping air could be that they are adjusting their swim bladders. Again, high nitrate levels may be affecting the fish. They then use the gulped up air to adjust their swim bladder in order to stop themselves from flipping over.

Another possible reason for adjusting swim bladders could be gas in their digestive tracts, which can be caused by grains in some foods.

This can be remedied by feeding them defrosted frozen peas with the shells removed. Basically acting like a laxative, they will help to clear their digestive tracts.

Once cleared, it is best to try feeding them with another type of food.

Anonymous answered
A fish will gulp air in an emergency when there isn't enough oxygen in the water. Lowering the temperature of the water increases the Dissolved Oxygen levels in the water. My fish were gulping air out of the water and passing it through their gills and I threw a few ice cubes in the water. The colder water held more oxygen and my fish no longer needed to gulp the air above the tank.

Anastasia (nickname: Anya) answered
Gold fish are able to gulp air directly in to their gills, mostly to get extra oxygen. But if your goldfish is doing this frequently, set up an air stone, bubble stone, or strong filter that won't suck in your fish. Fish use this in emergencies, when little air is in the water. If a fish is in one of those classic, round bowls, with a tiny surface, fish get less, and less, and less air, until they start to suffocate, slowly. Small round bowls say "death" all over them.

Anonymous answered
Even fish need some kind of air, do you have air bubbles in your tank because they could die if you don't.

Anonymous answered
I have two and mine are doing this too after about a day after I have changed the water I keep having to change the water daily I think I might have to buy a tank at the week end with some plants that release more oxygen for them!